Monday Night RAW began with Drew McIntyre, Ric Flair, Shawn Michaels, Christian, and Big Show. All were smiling after the Legends were back after helping Drew at Clash of Champions in his ambulance match against Randy.

Orton commented that anyone who will cross The Legend Killer would pay the price for it before leaving the arena tonight.

After Randy left later in the night, Drew made an open challenge for having a WWE championship match with him. The challenger can be anyone who has never challenged him before.

Check out the complete WWE RAW results and highlights held on this week Monday.

Before the bell rang, Asuka and Zelina had a heated argument at the backstage. After that, Zelina entered aggressively, and once again, she attempted to give her level best to fight against Asuka: RAW Women’s Champion. 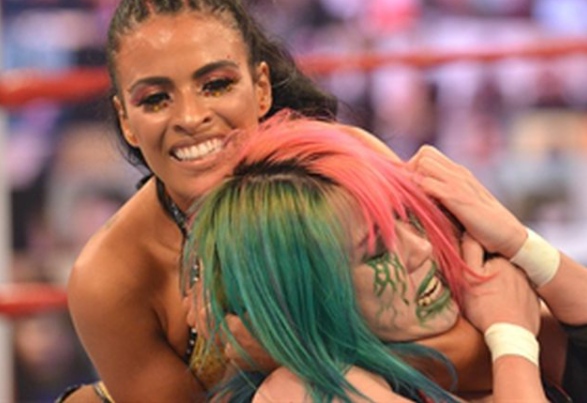 Asuka straight away attempted for Armbar. Zelina was coping up by grabbing Asuka in the Octopus hold. Asuka was rolled outside, and she holds Vega with her knees.

Asuka controlled the match in the ring, and she hit with a suplex, although her arm was severely injured. Vega and Asuka traded hold, and then Zelina was looking for moonsault, but unfortunately, she failed. Asuka grabbed the opportunity and countered with Asuka Lock and once again wins the match right after WWE Clash of Champions 2020.

Zelina Vega put great efforts, but in the end, the match was rewarded to Asuka.

Result: Asuka is the winner, and she retains her RAW Women’s Championship.

Andrade’s former manager helped Zelina and took her to the backstage area as she was still under the effect of Asuka Lock. Andrade was yelling that both Angel Garza and Zelina Vega are weak links, stopping him from achieving his goals. 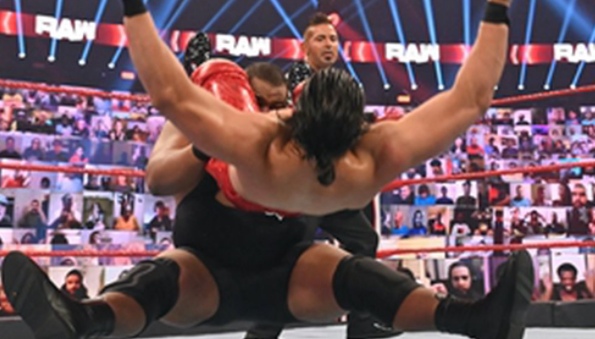 Keith was having control of the match from the start. Soon Andrade was successful in getting the hold. Lee went for hitting a splash at the corner, and he grabbed Andrade from the turnbuckle’s top. Before grabbing him, he tossed Andrade like some ragdoll around the ring.

Andrade was successful in getting the control back, and he hits with the double knees. Andrade was about to win the match, but suddenly Lee hits with a massive Spirit Bomb and becomes the winner.

3. Dana Brooke and Mandy Rose vs. Lana and Natalya

Lana and Natalya demanded that from Shayna Baszler and Nia Jax, the title of WWE Women’s Tag Team should be taken away and should be handed to them. Adam Pearce: WWE official showed up to let both know that nothing like that will happen. He added that both could prove themselves by facing the Red Brand’s newest tag team: Dana Brooke and Mandy Rose. Lana welcomes both of them by slapping Mandy, which made Rose angry. 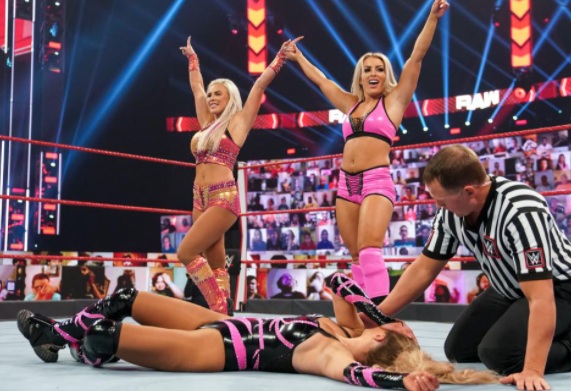 Dana and Natalya kicked off the match. At the start, Rose received the tag, and Natalya was having a lousy time inside the ring. Lana looked for a tag and moved down Dana before she went for tagging Natalya one more time.

Rose returned to the ring and hit Lana with a popped knee strike and wins the match easily.

Result: Dana Brooke and Mandy Rose are the winners.

Owens showed great spirit in the beginning. Aleister was too focused on moving down KO. Kevin went for hitting a senton followed by a German Suplex to slow down the move of Aleister. Black went for hitting massive round kicks to KO’s head and tried for a knee strike but failed. KO hits with a Superkick and receives a near fall. 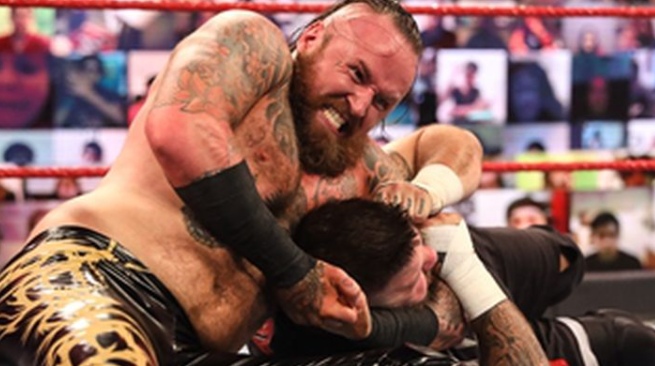 Aleister got near falls quite frequently and was irritated as he argued with the referee. KO regained the energy, and Aleister hits the back of his elbow to the referee; Black earned a DQ loss for hitting the referee like this.

After the match, KO hits with a stunner and left the ring.

KO and Aleister Black’s heated rivalry got freshen at RAW, and they attacked each other mercilessly on the show.

In the night, Akira Tozawa, Drew Gulak, and R-Truth were involved in trading the 24/7 championship. The trio had an official battle to win the title after that at the WWE Thunderdome. 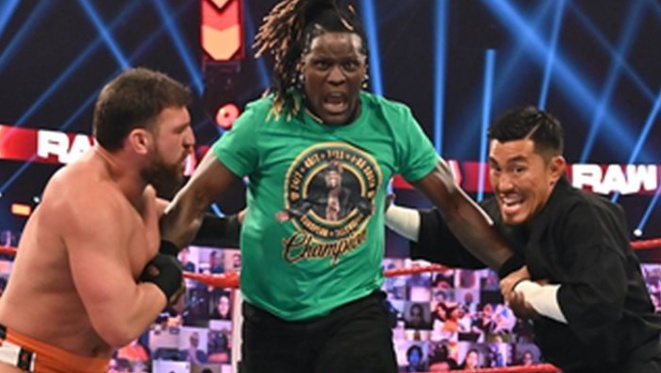 R-Truth was having the wrong time in the beginning as the rest two formed a team against him. Gulak did not allow Tozawa to make the tag, and both got into it. R-Truth was back, and one more time, the match turned into a handicap match before all can realize that in the end, only one can win.

On R-Truth, Gu-Lock was locked in, and Akira went for hitting Gulak with a Senton. R-Truth then hit Gulak with an Attitude Adjustment.

Result: R-Truth is the winner, and he continues to be the 24/7 Champion.

Before the match shifted outside, Dominick unloaded himself on Murphy. Dom moved Murphy into barricades first and then into the desk of announcers. Dominick was devastating Murphy before he got hit with a kick by Murphy. 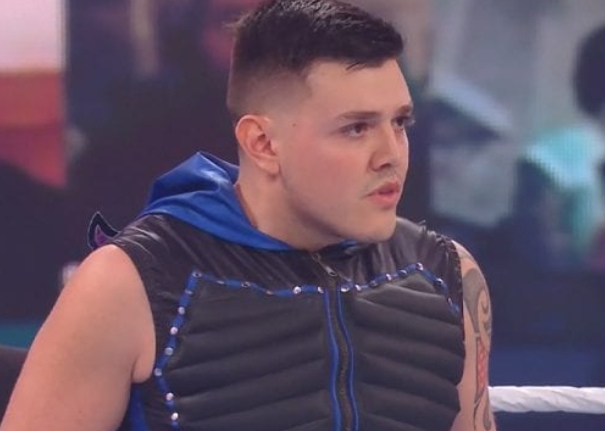 Murphy was shouting, ‘it is not a matter of your concern’ and continues to kick Dominick. Dom then hits with a jawbreaker. Murphy was looking for tossing Dominick outside.

Dominick soon grabbed a kendo stick, but Aalyah came and stopped him from using it. Dom was busy moving her sister away, and meanwhile, Murphy rolled him up and won the match.

After the match, Dom was furious and confronted his sister. He said he was trying to save the legacy of the family. Aalyah was not ready to accept her defense for Murphy. Dom then agreed with Rey and told Aalyah that she is naïve. Alayah slapped Dom after this, and things got heated up once again.

Result: Murphy is the winner.

7. Ricochet, Mustafa Ali, and Apollo Crews vs. The Hurt Business

Ricochet, Mustafa Ali, and Apollo Crews had a plan moving on to the Six-Man Tag Team fight. They carried out Bobby, and then the trio looked for the US Champion and attempted to neutralize him. Any moves that The Hurt Business was planning were not successful as at ThunderDome, the lights were flickering, marking The Retribution’s entry. 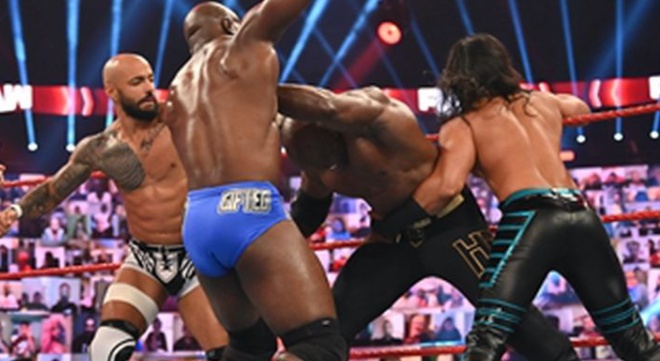 Though The Retribution did not show up, this distracted Bobby, Shelton, and Benjamin from their game; Mustafa Ali went to crush MVP by hitting him with a 450 splash and winning the match.

Result: Ricochet, Mustafa Ali, and Apollo Crews are the winners.

McIntyre was confident enough as always, and he was waiting for his challenger. Dolph Ziggler showed up, and Drew irritated seeing him and said he wants to face someone he had not encountered before. Dolph, though came to announce the entry of Robert Roode as he made his first appearance at RAW. Roode was traded to RAW earlier in June in exchange for Styles. 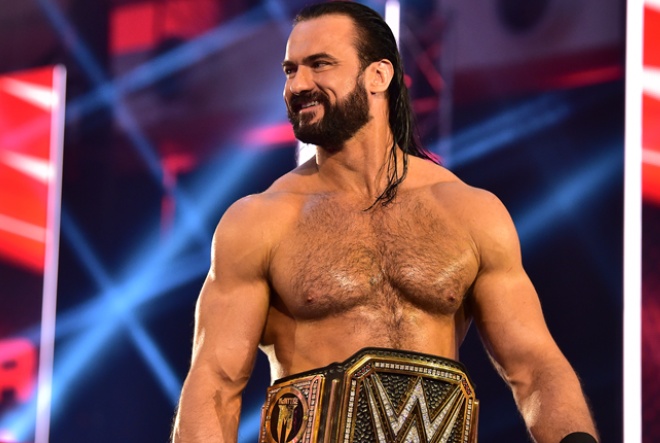 The famous superstar in NXT, US, and RAW Tag Team Champion was all set to try his luck for WWE Championship.

Roode begins the fight, and he moved down Drew with a Figure Four Leglock, which almost injured the WWE Champion. Roode was very close to the championship but could not keep Drew down for long. The WWE Champion fought tough despite all the pain and hits with a claymore to have his title back.

Result: Drew McIntyre is the winner, and he retains the WWE Championship.

Based on our analysis for this week’s Monday Night RAW, this is what we think could happen next week. Here are the predictions by WrestlingOceans Team-

In this episode, we noticed that tensions were prevailing between the two. Murphy even put his hands on Rollins after he stole his phone to leak his message with Aalyah.

2. Dominick Mysterio might have a rematch in the next episode.

This time, his sister got distracted when he got a kendo stick to hit Murphy and lost the match.

In a recent episode of RAW, Asuka vs. Peyton Royce ended up in disqualification. There is a possibility that the feud continues in the upcoming episode of RAW.

4. Aleister Black vs. KO can retake the place in the next episode of RAW.

This time the match ended in a disqualification as Black hits the referee by mistake.

What a great episode of RAW Thunderstorm we have this week.

This is all about the WWE RAW 28th September 2020 episode. Share about your experience. We would love to hear your thoughts.