WWE live aired its latest episode of RAW from WWE Thunderdome along with the WWE DRAFT 2020. Here we have covered WWE RAW 12th Oct results, highlights along with the WWE Draft 2020 information. Go ahead and know who wins and lose in the Monday Night RAW and which WWE superstars drafted to RAW and SmackDown in 2020.

The Monday Night RAW kicked off with Randy Orton. He said that Drew McIntyre got pinned for almost a year before he beat him in a tag team match last week.

1. Aleister Black vs. Kevin Owens: A No DQ match

Without wasting a second, Aleister Black and Kevin Owens went after each other before the match could have started officially. The bell rang, and both began to fight brutally. Black and KO threw whatever they got in their hands on each other at the ringside. 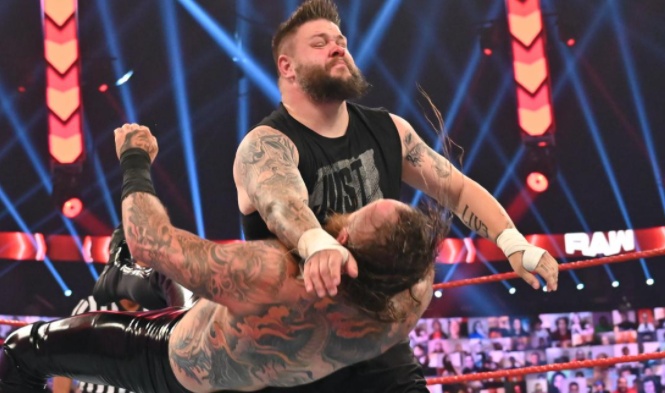 Aleister moved KO through the announcer’s desk. Inside the ring, KO set up a pile of chairs as he wished to punish back Black. Aleister came and brought few more chairs in and moved KO through the unforgiving steel. KO terminated a knee strike by Black by picking up a chair. KO receives a near fall off a DDT.

Black was seeking the opportunity to hit with the Black Mass, but KO bend down, and the kick of his rival’s got connected with a turnbuckle. KO got a chance to hit with the stunner followed by powerbomb Aleister through the table. KO earned the victory for himself in this exhausting match.

Result: Kevin Owens is the winner.

Seth Rollins got drafted to SmackDown after spending four incredible years on the red brand. In WWE Thunderdome, Seth Rollins showed up to tell the red brand that they are losing one of the most famous and greatest superstars of RAW. Soon Jeff showed up; he has been selected for the red brand in WWE Draft. Jeff came to help giving farewell to the Monday Night Messiah. 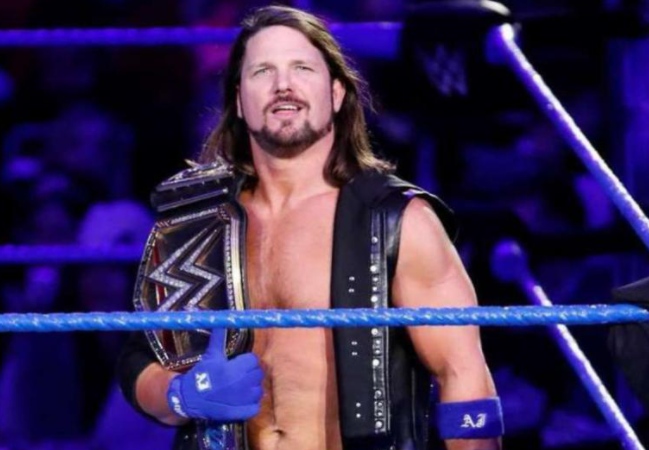 When AJ Styles, Seth Rollins, Jeff Hardy confronted, it soon became a Triple Threat Match. In the beginning, Seth Rollins was moved outside as Hardy and Styles went after each other inside the ring. Styles attacked on the injured knee of Jeff. Rollins came back to hit Styles with a sling blade. Jeff went after Rollins to hits with Whisper in the Wind but ended up injuring his knee again.

Rollins was seeking the opportunity to prove he holds the real power in his last appearance on RAW. For Monday Night Messiah, the new challengers turned out to be tough ones. After hitting AJ with Twist of Fate, Jeff thought he might win the match. Before Jeff Hardy could follow up with his recent move, Elias showed up, and he broke Jeff’s guitar on his back. AJ Styles got a chance to cover for Jeff and get three-count.

3. Lana and Natalya vs. Mandy Rose and Dana Brooke

Brooke and Natalya kicked off the match. Rose received the tag at the beginning of the game. Soon Mandy took control of the match as Dana was not successful in taking power. Rose and Dana went for hitting a double team and stopped Lana from receiving the tag.

Lana got tagged in, she, along with Dana, was shouting a lot. Mandy showed up and hit with a knee strike followed by a double team senton. This allowed Dana to win the match easily.

The latest tag-team Many Rose and Dana Brooke continued to prove themselves on the red brand by gaining victory over Lana and Natalya. After the match was over, Natalya told The Ravishing Russian that their partnership is no longer significant and walked out after saying this.

Result: Mandy Rose and Dana Brooke are the winners.

In the commentary for this match, we had Zelina Vega. As the game began, Angel Garza started to get a beating by Andrade. Soon Andrade went for hitting a back suplex from the counter. Garza moved Andrade outside and returned to the ring to end the match by hitting with a Wing Clipper.

When the match was over, Zelina came to the ring to see if Andrade was alright. Soon the light was off on the WWE Thunderdome. When the light was on again, Bray Wyatt and Alexa Bliss were present inside the ring.

Result: Angel Garza is the winner.

5. Robert Roode and Dolph Ziggler vs. The New Day

Dolph and Woods started the match. Kingston received the tag at the beginning of the game. Dolph went for hitting a Famouser to obtain a near fall. 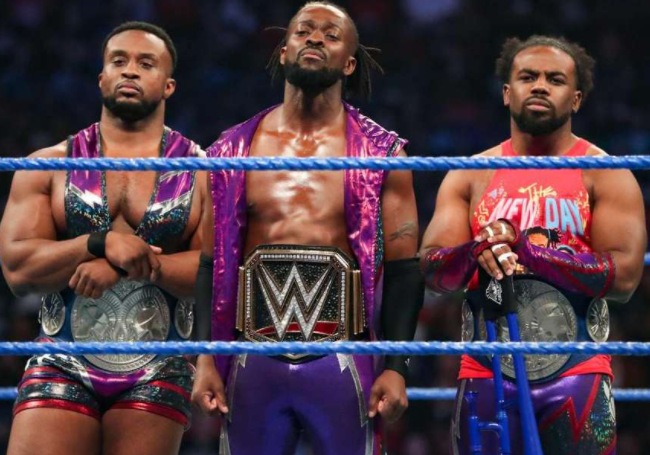 Dolph and Robert were looking to keep Kofi in isolation. Kingston managed to make to the tag somehow.

Xavier came and tossed both Ziggler and Roode outside. Woods receives near fall off a DDT. Dolph responded to this by hitting a DDT, followed by his own DDT. Dolph tagged Roode, and then Woods went for making a tag. Kingston and Woods moved Roode down to receive the three count and retained their titles. 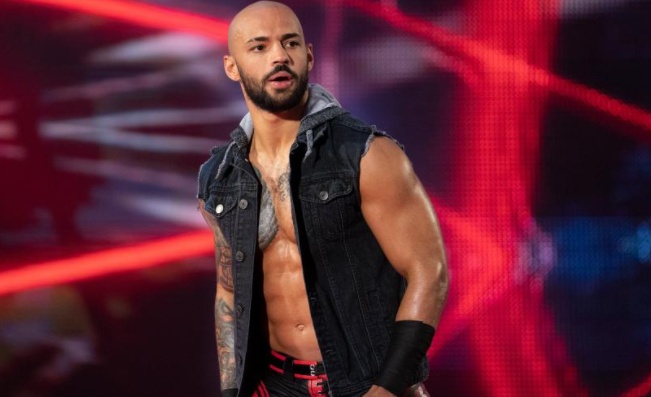 It appeared that Ricochet is at a loss as the rest of The Hurt Business was present at the ringside. Cedric collided with the referee when Ricochet managed to come out of a Michinoku Driver. MVP showed up, and he slides a chair inside the ring towards Cedric; this was interrupted by Ricochet.

The highflyer then got WWE Hall of Famer Eddie Guerrero Book and took a page out from it and tossed the chair to the Cedric. As the WWE officials saw Cedric had the chair and Ricochet was there on the mat, they had left with no other choice and rewarded Ricochet’s match. By winning the game, Ricochet has now ensured that The Hurt Business cannot trouble him in the future.

Result: Ricochet is the winner.

7. A Women’s Battle Royal for determining the No.1 Contender for the RAW Women’s title

The Battel Royal kicked off, and Nia and Tamina moved each other down. Nia soon eliminated Tamina. Kay was making attempts to eliminated Nia, but in the match, Bellie was moved outside. In the commentary, we had Asuka. She was rooting for Mandy Rose and Dana, but both were eliminated on the red brand.

Jax was defending Shayna, and soon the whole lined up to eliminate Nia. Nia was furious and moved Lana through the commentator’s desk. Backstage, Drew McIntyre and Randy Orton were involved in a brawl.

Asuka watched the match from the backstage, and inside the ring, Lacey and Natalya were there. Natalya moved Lacey towards the ring post and was about to win the game, but Lacey kicked her.

Natalya then dropped Lacey, and it appeared like the match winner is Natalya, but Lana was present in the ring. For winning the match, Lana kicked Natalya out of the ring.

Result: Lana is the winner, and she will now face Asuka at Hell in a Cell 2020.

So that’s how the Monday Night RAW Roster looks for men and women after the completion of WWE DRAFT 2020.

In this episode of RAW, we saw Elias smashed the guitar of Jeff on his back. We think in the next episode of RAW, the feud will continue. If this happens for real, Elias might defeat Jeff Hardy.

Mandy and Dana defeated Lana and Natalya in the recent episode of the RAW. It is quite explicit that they have now become top contenders for the women tag team title. There are chances in the next episode, Nia and Baszler attack Mandy and Dana. The attack might even tease a match between them in the future.

Randy and Drew had a brawl in this episode of RAW. We predict that the feud will have its presence in the next episode too. If Drew looks for Randy, he might think to hit with an RKO.

We had a great show of RAW and witnessed a fantabulous Triple Threat Match. WWE fans got various surprises in the WWE Draft 2020.

This is all from this week’s RAW episode. We hope you enjoyed reading the post. WWE Hell in a Cell is just a few days away. Keep visiting the site so that you don’t miss out on the latest PPV updates.