The latest episode of RAW was held at Amway Center, Orlando, Florida. In the commentary, we had Byron Saxton, Jerry Lawler, and Michael Cole with us. Here we have covered RAW highlights 21st Sep 2020 along with match results and winners held on Monday this week.

The Retribution kicked off Monday Night RAW. They said that WWE had allotted them contracts for stopping them from attacking players and staff further. A blue-haired woman from the group who looked awful and had good resemblance with Mia Yim said though they had signed a contract with WWE, they won’t stop their attacks.

Below mentioned are the complete fight details of RAW 21st September 2020 along with the highlights and match results.

1. Angel Garza and Andrade vs. Murphy and Seth Rollins vs. Humberto Carrillo and Dominik Mysterio

In a triple threat tag team match for determining challengers for The Street Profits at WWE Clash of Champions for RAW tag team championship match, Humberto Carrillo and Dominik Mysterio appeared to be flying high. Soon, the scenario changed as Andrade and Angel Garza started proving that they do not need Zelina Vega to be in their corner for succeeding. 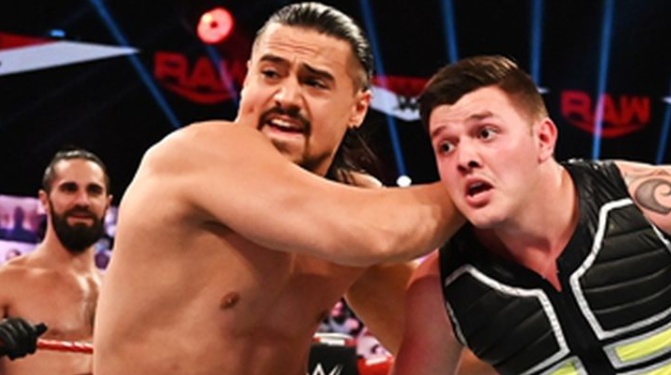 Inside the ring, Carrillo and Murphy showed up early on, and Murphy was getting tossed outside. Carrillo got cornered by Angel Garza and Andrade. Dominik received the tag in, and he moved out both Andrade and Angel Garza using top rope dives, and for this, he took Humberto’s help.

Mysterio was about to receive the pin with a sunset flip, but Angel Garza broke the pin by hitting a dropkick. Murphy moved out Andrade, and Seth Rollins left the match by commenting that he had some other plans on his mind.

Mysterio and Humberto were knocked out, and Angel Garza and Andrade moved Murphy out. Angel Garza gains the quick win by hitting the Wing Clipper.

Result: The winner of the triple threat tag match is Angel Garza and Andrade.

They will now face The Street Profits at WWE Clash of Champions for the RAW tag team championship.

Keith Lee showed his crazy strength on the show, and he tossed Drew out of the ring. Keith and Drew exchanged thunderous chops by being at the ringside, and then McIntyre threw Keith into the announcement desk. Keith lee was running away from the champ inside the ring. McIntyre went for lifting him but can’t do so, and Lee hits with a forearm shot straight on his already injured jaws. 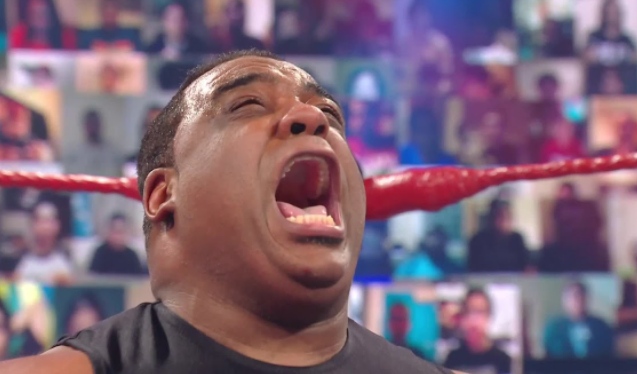 Keith Lee was quite hesitant, and soon McIntyre received a near fall as he countered the Spirit Bomb with a spinebuster. Keith Lee got the control back, and Drew was kicking out every pin and went for hitting Claymore suddenly.

Randy Orton showed up, and he moved out Drew using a Steel Chair. Randy hits the already injured jaw of Drew and then hits Lee with a punt kick.

Randy Orton came from behind and took out Drew with a Steel Chair. Randy drove the chair into Drew’s already broken jaw and hit the punt kick on Keith Lee.

Keith Lee was looking to get himself an opportunity for WWE Championship Match at Clash of Champions against Drew McIntyre. Things didn’t work in his favor as Randy Orton showed up. Earlier it was not confirmed whether Randy Orton would be present at the PPV or not. After doing the damage, The Viper moved back to the ambulance and vowed that Drew would be leaving in it at PPV.

Initially, Mickie James was strong, and she was tossing Vega around this ring. Vega had quite good speed, and she countered a couple of moves and then locked in an octopus lock with the help of ropes. 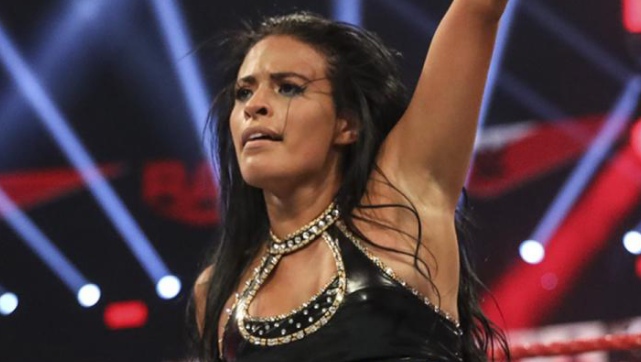 Zelina was looking to hit tornado DDT, but Mickie had scouted her well. James hits a seated senton, and then Zelina went for hitting her backstabber finisher, and the match was rewarded to her.

Result: Zelina Vega is the winner and will face Asuka for the RAW Women’s title at WWE Clash of Champions.

Apollo Crews showed up to take revenge from his former friend Cedric as he turned his back on him and Ricochet previously. Cedric Alexander seemed to be preoccupied while being at the ringside with Ricochet and got distracted. 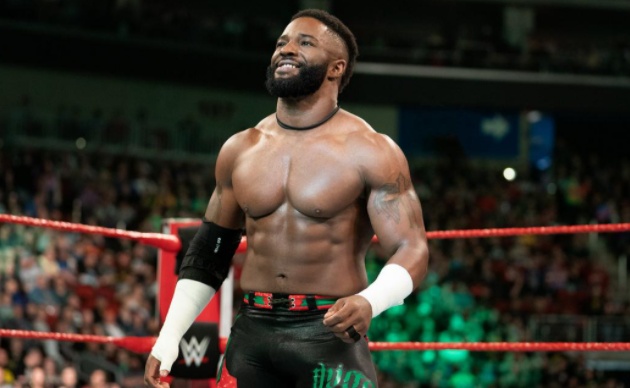 This allowed Crews to roll him up and receive the three count. As the bell rang, The Hurt Business started to attack Apollo along with Ricochet. Lashley put Apollo in the Hurt Lock and sent him a message before their US Championship match scheduled this Sunday at WWE Clash of Champions.

Result: Apollo Crews is the winner.

5. Natalya and Lana vs. Nia Jax and Shayna Baszler

Natalya got hold of Nia and Shayna received the tag in. Shayna locked in the Kirafuda Clutch on Lana, and the match got finished within seconds. 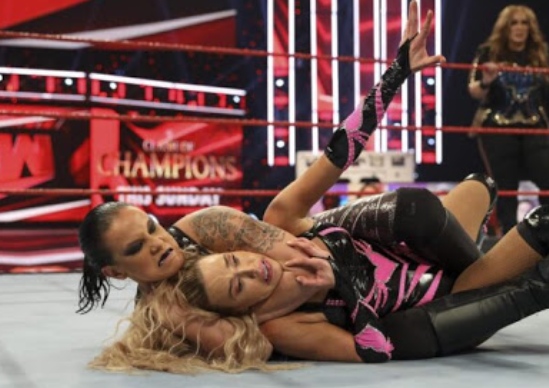 After winning the match, the champions shifted their attention to the PPV’s challengers, The Riott Squad. Nia Jax moved Liv Morgan through the table of announcers. Ruby Riott was stopping her. Nia Jax then grabbed Lana and dragged her through the table.

Result: Shayna Baszler and Nia Jax are the winners.

Royce showed up great energy in the starting and gone through a massive sequence of moves and received a near fall at the end. Asuka, before attempting for Asuka lock, successfully received some shots. Zelina Vega came and attacked both of them and broke the pin. Zelina was shouting the title shot belong to her. 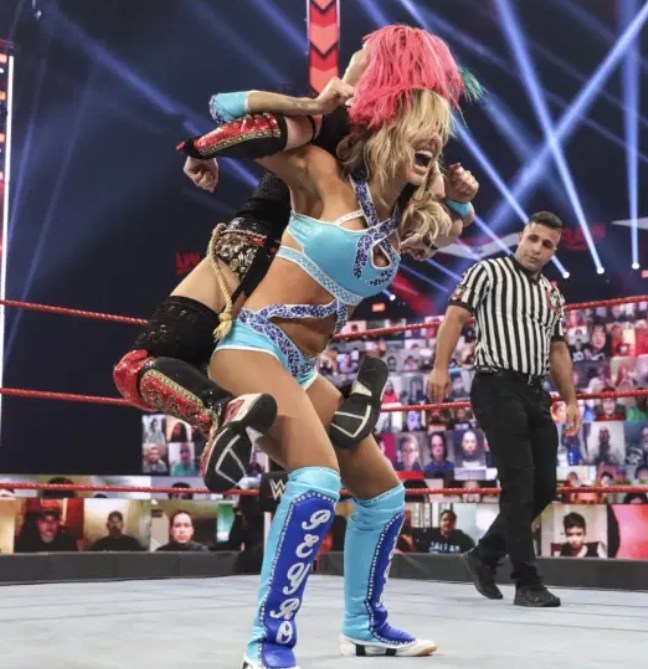 Asuka had a confrontation with Peyton in the night before their match, and she taught Royce a lesson in respect as she defeats her with the Asuka Lock. The RAW Women’s Champion also faced Zelina, her challenger at The Clash of Champions.

7. The Hurt Business vs. The Retribution

The RAW’s main event saw Mace, Slapjack, and T-Bar’s debut inside the ring as they faced Bobby Lashley, Cedric Alexander, and Shelton Benjamin of The Hurt Business. 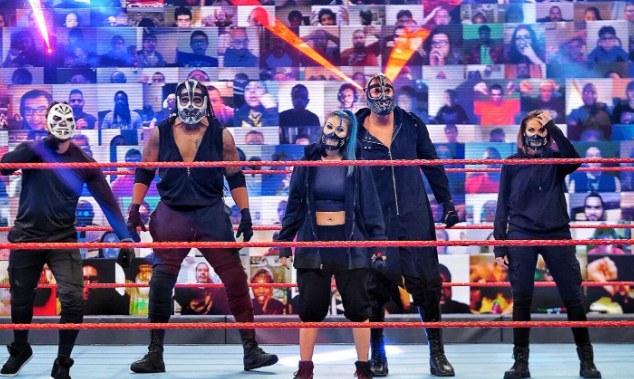 The Retribution came, and there was no music playing in the background. The audience monitors and stage lights were shut down. When The Hurt Business entered, lights were on again. The Retribution was in control, and Cedric Alexander was getting brutally attacked inside the ring.

Slapjack was tagged in by T-Bar and had Cedric in their corner. They were stopping Cedric from making a tag. Alexander successfully countered and tagged in Benjamin, who went after the guy had a silver mask.

As Slapjack entered with a tag Shelton was moved to the corner. Bobby receives the tag in, and he moved out Slapjack and then locked in the Hurt Lock.

T-Bar breaks the hold, and the match witnessed a DQ ending. The Hurt business got attacked by several members of The Retribution.

1. Asuka might get attacked by Peyton Royce and Billie Kay

On this week’s RAW episode Peyton Royce vs. Asuka ended up disqualified as Zelina Vega interfered with the match and attacked Asuka.

These things may lead to Asuka getting attacked by Billie Kay and Peyton Royce in the upcoming episode of RAW.

Randy Orton punted Keith Lee on this episode of RAW. In the next episode of RAW, there might be a celebration of Orton’s victory if he wins the match against Drew McIntyre at Clash of Champions. Chances are Keith might interfere with the celebration and attack Orton.

During the match, Seth Rollins left Murphy alone inside the ring, saying that he had some other concerns in his mind. Maybe Murphy takes some more abuse from Rollins in the coming episode of RAW, and then both will split up.

This episode of RAW has lots of shocking moments-

So that’s pretty much it from this Week’s Monday Night RAW Highlights and Results. WWE has now created a lot of thrill for its upcoming PPV event- Clash of Champions 2020 which is on 27th Sep 2020.

We hope you enjoyed reading the post. Do let us know your views in the comment section below.