WWE’s latest PPV was held at Amway Centre, Orlando, Florida. For all WWE fans, we bring you Clash of Champions results 27th Sep 2020 Show highlights and match winners. Hold on to your excitement and read the post to explore all about the event held on the last Sunday.

Cesaro and Shinsuke Nakamura defeated The Lucha House Party at the Kickoff Show and retained their SmackDown Tag Team Title.

Here we have covered full match details and winners of Clash of Champions 2020.

The match kicked off, and soon the fight moved out of the ring. Zayn was the first one among three to pick the ladder. Zayn hits Hardy and Styles with the ladder. Sami was about to climb after setting up the ladder, but Jeff interrupted, and he moved Sami away from the ladder. 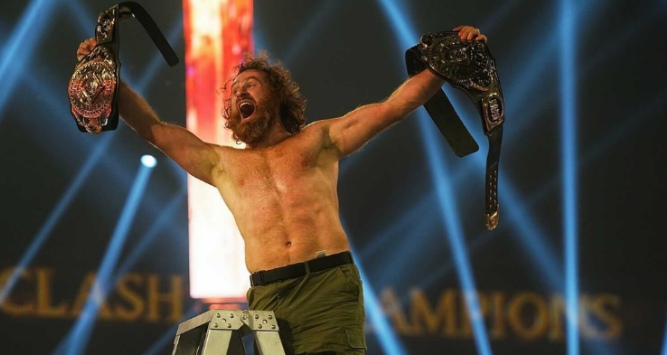 Jeff and Styles were present inside the ring. Hardy was getting tossed into the ladder, which was upside down. The ladder got closed as Sami fell on it. AJ threw Sami into the ladder again; this time, he bounced around for a while.

Zayn returned and was about to climb the ladder. AJ tossed a ladder at Sami from the outside and moved him down from the ladder. Jeff came when AJ was at the top of the ladder, and both Hardy and Jeff dived outside as Hardy hits with a dangerous move.

Styles attempted to climb the ladder as the other two were down. Jeff didn’t allow it to happen and moved AJ off the ladder. Sami brought handcuffs sets. Using a handcuff, he tied Hardy to the ladder but with the earlobe.

Sami then went for handcuffing AJ with the ropes of the ring. Styles moved him out by hitting with a Suplex. Sami then handcuffed Styles to himself.

Jeff returned, and he was having the ladder with him. Sami got the keys and handcuffed Styles with the ladder. With his silly plans at Clash of Champions, Sami won the title, and now he is the Intercontinental Champion.

Things have finally settled in the Intercontinental Title debate as Sami Zayn became the true Champion after defeating AJ Styles and Jeff Hardy in Ladder Match.

Result: Sami Zayn is the winner of the ladder match and now the new Intercontinental Champion.

In the beginning, Asuka was taking Vega very lightly. Soon Vega hits with some massive hits and starts to pass comments on the Champion. Asuka got the control of the match with her. Asuka bought an armbar, but Zelina went for the ropes and broke it. 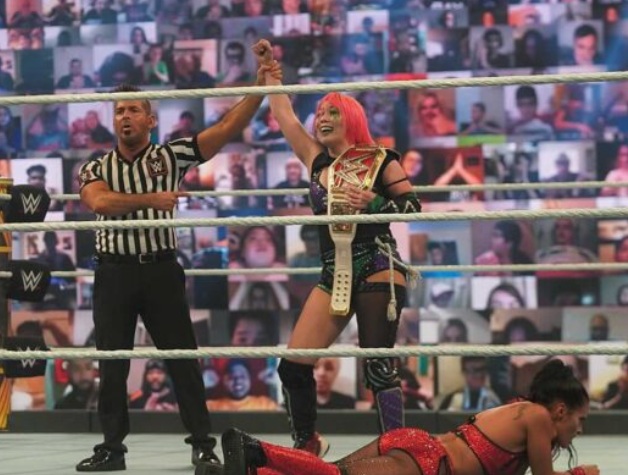 Right before Asuka went for the Asuka lock, Zelina was looking for a submission. Vega successfully countered it using a cross arm breaker.

Zelina was at the top of the rope. She hits a Rana from there and later received few near falls and got hits by a couple of kicks. Both Zelina and Asuka were trading roll-ups. Vega got stuck in Asuka lock, and she tapped out at Clash of Champions 2020.

The Empress of Tomorrow moved aside the challenge of Vega Zelina for the RAW Women’s Title. But this was after Zelina impressed in her most formidable challenge to date.

Result: Asuka is the winner, and she retained the RAW Women’s Championship.

3. Apollo Crews vs. Bobby Lashley (c): A US title match

MVP showered Apollo with an acrimonious talk at the ringside. Bobby Lashley controlled the match, and he punishes Apollo as he offended him earlier in the game. Apollo went for hitting a couple of shots, but he got hit with a Flatliner. 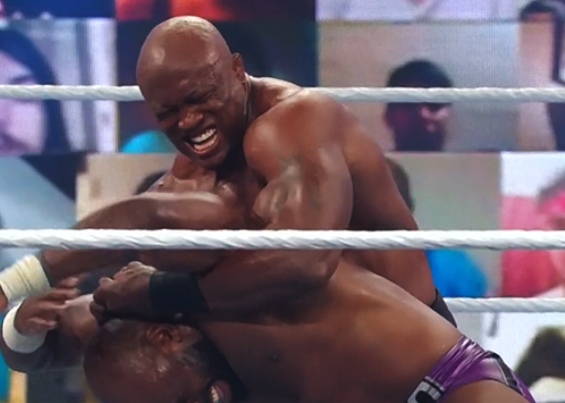 Apollo managed to take control, and he hits Lashley with some moves and then moved him outside. Lashley got lifted by Crews. Apollo dropped Lashley and received a near fall off a standing moonsault.

Apollo managed to turn it around and hit some moves in the corner before sending it.

Crews went for hitting a Superplex, but he hits with a Standing Shooting Star followed by a frog splash so that he can get a near fall. Lashley soon gains the strength back and goes for the Hurt Lock to mark his victory at the event.

Result: Bobby Lashley is the winner, and he retained his United States title

Andrade and Angel Garza were there without any services of Zelina Vega, and they appeared to be best so far. They showed excellent teamwork and surprised the champions along with the WWE Universe. 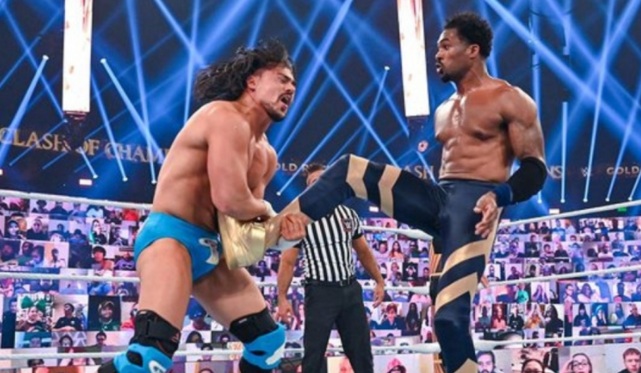 Dawkins and Andrade started the match, and soon challengers took him towards their corner and went for tagging in and out. Angelo moved down Garza and Andrade. Ford got tagged by Angelo for a double team.

Angel Garza received the tag and began to dominate the match.

Garza went for a double team move. Andrade and Garza were displaying great team efforts. Ford took control of the game, and he moves Garza out of the ring.

Andrade and Dawkins were back, and Garza and Andrade move out both of the champions. Garza was at rope’s top, and he hits with a Spanish fly from there on Ford to receive a near fall.

Ford was looking for a tag, but Andrade destroyed Dawkins outside the ring. Ford was left alone, and Andrade went for hitting the double knees to receive a near fall. Ford then tagged in Dawkins.

Dawkins hit a spinebuster, and he was looking for a pin. Andrade had Dawkins shoulders up at the third count, and the referee just called off the match.

What do you think it was a mistake for real or some setup?

The Street Profits continue to be the RAW Tag Team Champions, but they didn’t mark their victory over Angel Garza and Andrade without any controversy.

Result: The Street Profits are the winner and retained their RAW Tag Team title.

5. Asuka vs. Bayley (c): A match for SmackDown’s Women’s Championship

Bayley got hit with massive hits before she could understand what exactly was happening. To slow down the moves of Asuka, Bayley hits her with a suplex. Bayley was on the top, and she strikes at the face of Asuka with her knees. 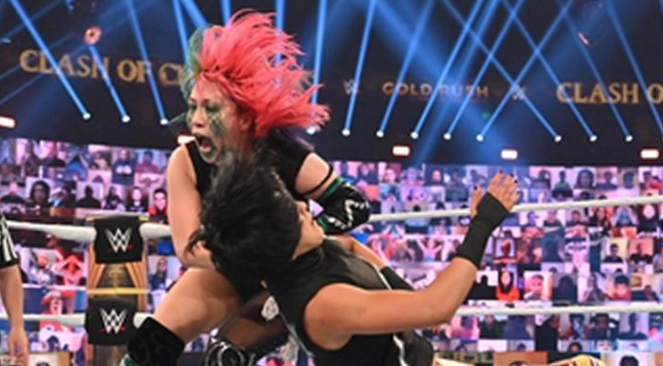 Right after the disqualification, Sasha Banks too joined the ring and attacked Bayley. 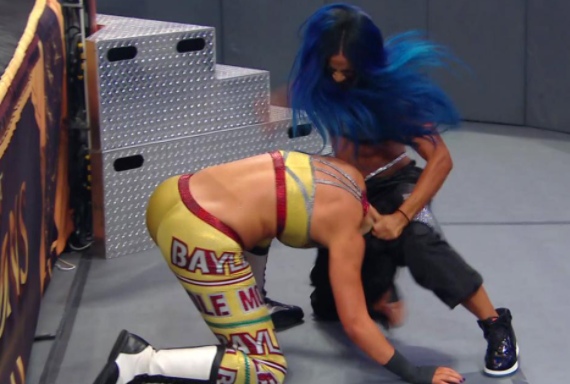 McIntyre took control of the match right from the beginning, and he blocked an RKO. Drew got stuck in a draping DDT. Orton tried to set up the finisher, but he got interrupted by Big Show. He caught Orton by his foot and moved him through the announcement table using a chokeslam. 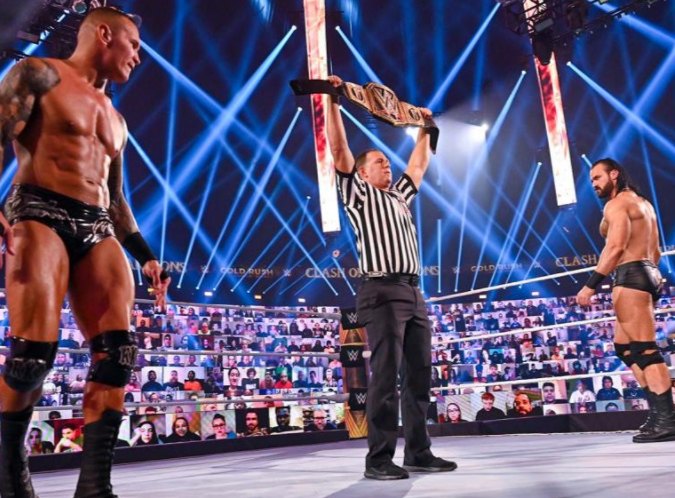 Outside the ring, McIntyre was dominating. Drew was tossing Orton into the door of the ambulance. Drew brought in a steel chair, and he was having a great time beating Orton brutally. The Viper soon took revenge on Drew by hitting the steel chair at Drew’s jaws, which are already injured.

Ultimately both Orton and Drew ended up in the ambulance as they tried to move each other out. They were fighting at the driver’s side, and McIntyre attempted for a Claymore. Orton was lucky as he sidestepped. Drew and Orton moved at the backstage on WWE Clash of Champions. Randy got attacked by Christian there, and he moved him to the catering area.

At Clash of Champions, Shawn Michaels showed up. He went at the top of the vehicle, and there was Sweet Chin Music in the background, and he was moved out then. Drew was attempting to move Orton into the ambulance, but he got hit with an RKO.

Result: Drew McIntyre is the winner, and he retains his WWE Championship.

The most awaited fight was on between the brothers- Roman Reigns and Jey Uso. Uso was initially highly confident. He began to mock Roman. Reigns went for hitting a clothesline to get a near fall and then took control of the match in his hands. Uso was moved outside, and Reigns brutally attacked his cousin.

Uso gained the strength back and turned things around by hitting the Samoan Drop and receives a near fall. Reigns beat with a Superman punch. Roman insulted Jey by saying that he should not, again and again, get up for getting attacked by him.

Uso moved Roman out of the ring, and he hits with a massive dive into the barricades. Uso got the control of the match and hits with a crossbody and received a near fall. Jey was looking for another pin. Things between both started getting worse as Reigns moved down Uso. Roman was looking for a spear, but Uso avoided it. Jey hit with a superkick and had a frog splash, but Roman managed to kick out despite all the Uso’s attempts.

This kick out eventually leads in a low blow to Uso. Reigns soon get the strength back and go for hitting the spear. Roman was a bit hesitant, and he was passing comments on Uso. Reigns began to threaten Uso before he hits another spear. Jey denied the fact the Tribal Chief is Roman.

Paul came, and he tried to calm down Roman. Reigns didn’t listen to him and unloaded himself on Uso. The referee interfered and tried to stop him, but Roman threatened the referee too. Jimmy Uso showed up, and he wanted to throw a towel for Jey, but he stopped him from doing so.

Roman didn’t stop, and he kept hitting Uso. Jimmy went for calling for the bell.

Result: Roman Reigns is the winner, and he continues to be the WWE Universal Championship

Call Reigns Universal Champion or Big Dog; he is now “The Chief.” Roman Reigns always demanded to be known so. After brutally attacking his cousin, he retains his Championship. The very personal family issue gets an end with an intense fight at WWE Clash of Champions.

The show’s beginning was not much exciting, but the excitement level increased in the last few matches that we got to see in the main event.